Hello CaDa!)
And so I received my order for CaDA Cyber ​​Wild Wolf Buggy C62002W + CaDA Cyber ​​Turbo-V C63001W + CaDA Cyber ​​G58 Submachine Blaster C81051W.
There was a problem with customs, since you sent by the FedEx system, and they are quite problematic with delivery (I was lucky to find a good assistant from FedEx who helped with customs clearance)
At the moment I have collected only the "Mizutani Sion" CaDA Cyber ​​Wild Wolf Buggy C62002W and as it turned out there was 1 part missing = namely JJ60310002 (I attach a photo).

Alas, this is a minus for the complete set, since the Part turned out to be very important during assembly, it goes to the lower part and strengthen the entire structure of the Auto.
Detail and Quality are important to me, since I acquired these Constructors as a CyberPunk Collector of the Game, and not as a toy (I collect different things for the Collection for this franchise).
I really liked the Auto Mizutani Sion, the design and style are identical.
I don't need motorization, since of course I'm not going to play in cars)
Although the backlight would look good, it's a pity that it doesn't come with the kit, but only separately)
Outcome = Excellent set = The constructor is very interesting, but due to the lack of one part, I had to rebuild the Auto completely and come up with my own version, this is certainly not good.

One more thing = I opened all the Boxes and saw that the CaDA Cyber ​​G58 Submachine Blaster C81051W model had damaged stickers (I attach a photo), they 2 were partially peeled off from the main sheet,
and the sheet itself will be deformed for future assembly, which is also a minus, although not very large, since it will visually look worse.
I had to peel them off from each other and carefully glue them back onto the sheet.
I have not collected it yet = I will check later for the presence of Detalek, whether it is enough.
You firm, of course, I see an interesting one and do good things, but in the complete sets it is not attentive, after all, these are constructors' assemblies, and not Figurines, which are one-piece and there are only 2-5 component parts.
Moreover, the Constructors are not cheap all the same.

Waiting for you to release "Yaiba Kusanagi Bike" !!!!! (in the order it is not strange so far, in the video it is)
And I hope that with him you can send a spare part for this machine because I do not have enough 1 inside for the CaDA Cyber ​​Wild Wolf Buggy C62002W !!!) 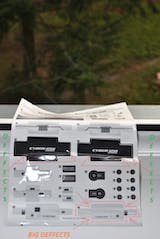 Thank you for your love and support to CaDA! We will continue to work hard to create more good works!

Great big model. It made it very nice. The manual is clear and understandable. It is very well mapped on the basis of the game. The fit of the elements is very good, there are only slight inaccuracies in the smaller elements. I want more models from this game! :)

Got the CaDA Cyber Wild Wolf Buggy | C62002W two weeks ago, was a pleasure to build. The manual was clear, the parts are in a good quality (although some panels had some scratches, would be glad if this could be improved in the future, had the same problem with the CaDA Bricks Master Series Italian Supercar) and the design is appealing.

Pro:
- Design is great
- fit of the parts is great
- clear manual
- the blue pins had no impact on this set
- the door mechanism is just great
- fun to build!

Three things I have to criticize:
1. the wheels on the pictures and in the set are different (tire profile). Not a problem, but strange
2. one sticker was damaged, but not seriously. Additional, prints would be always better than stickers. It would cost more but with these great designs, it would look even better.
3. I had some light sratches on some panels. An issue, I had with the CaDA Bricks Master Series Italian Supercar, too. Maybe because of the transport, maybe from production, maybe it could be improved. Nothing major, just a suggestion for improvement.

I also have the CaDA Cyber Turbo-V | C63001W and plan to buy CaDA Cyber CT-3X | C64001W... I hope these sets are not the last sets of this series. Because super cars are already more than enough on the market (although I love the Italien Supercar!) and this is finally something else.

Thanks for your detailed comment~ We will bring more and better products !